NORMAN, Okla. – The first spring Arnold Palmer Cup Ranking for the 2019 matches were released today. The top six golfers from the final ranking in the Spring from both the United States and International men and women - 12 total golfers - shall be among the 24 individuals selected to compete in the Arnold Palmer Cup. Longtime Arnold Palmer partner Rolex is continuing its 50 year relationship through its support of the matches which will be hosted by The Alotian Club June 7-9.

The remaining six men’s and women’s spots for the United States will consist of five committee selections, including at least one non-Division I golfer, and a coaches pick. The balance of the International team will include the men’s and women’s winners of The R&A Scholars Tournament, four committee selections, and a coaches pick.

The next Arnold Palmer Cup Ranking will be announced February 28. 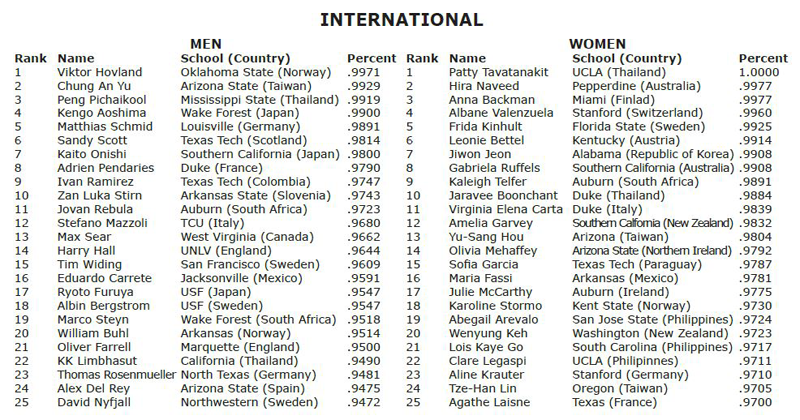 About Arnold Palmer Cup
The Arnold Palmer Cup was co-founded by Arnold Palmer and The Golf Coaches Association of America (GCAA) and began at the Bay Hill Club & Lodge, Orlando, Fla. in 1997. The event is a Ryder Cup-style tournament featuring the top men’s and women’s university/college golfers matching the United States against a team of International players. The Arnold Palmer Cup has been played at some of the world’s greatest courses including The Old Course, Royal County Down, Royal Portrush, Baltusrol, The Honors Course, and Cherry Hills. The 2018 matches at Evian Resort Golf Club became the only major tournament to feature men and women playing side-by-side as partners.

About Arnold & Winnie Palmer Foundation
It all began in the 1960’s when Arnold Palmer’s go-for-broke style of golf bolstered a legion of fans, coined by the press as Arnie’s Army. Palmer’s charisma and unfailing sense of kindness and thoughtfulness endeared him to millions around the world. Over the past four decades, the Palmer family has contributed time and resources to support their passion for helping others and in so doing have made a profound impact on many lives. Founded in 2015, Arnold & Winnie Palmer Foundation has been entrusted to continue Arnold Palmer’s legacy of philanthropy by ensuring a brighter future for our youth through children’s health, character development and nature-focused wellness. For more information, or to join Arnie’s Army, please visit ArniesArmy.org or contact Chris Kolodinsky at 407-876-3944 or ckolodinsky@arniesarmy.org.

Rolex and the Arnold Palmer Cup
Through an unwavering commitment to the game of golf for more than 50 years, Rolex has developed one of the
broadest and longest-standing relationships between brand and sport. These strong ties date back to 1967 when
Rolex partnered with legendary golfer Arnold Palmer. The charismatic American holds a special place in golf history
thanks as much to his natural talent and successful playing career as to his pioneering role in the sport. Since that
pivotal bond, Rolex has gone on to establish partnerships at every level of the sport, including the governing bodies
responsible for advancing the sport and the finest players, from The Big Three to the New Guard who are leading the
rankings at the moment. The decision to partner the Arnold Palmer Cup was thus a natural progression for the Swiss
watchmaker, and a tribute to the Arnold Palmer’s inspiring legacy.

Rolex, a Swiss watch manufacture headquartered in Geneva, is recognized the world over for its expertise and the
quality of its products. Its Oyster and Cellini watches, all certified as Superlative Chronometers for their precision, performance
and reliability, are symbols of excellence, elegance and prestige. The word “Perpetual” is inscribed on every
Rolex Oyster. But more than just a word on a dial, it is a philosophy that embodies the company’s vision and values.
From the beginning, in 1905, founder Hans Wilsdorf instilled a spirit of continuous improvement. This led Rolex to pioneer
the development of the wristwatch and numerous major watchmaking innovations, such as the Oyster, the first
waterproof wristwatch, launched in 1926, and the Perpetual rotor self-winding mechanism, invented in 1931. Rolex
has registered over 500 patents in the course of its history. A truly integrated and independent manufacturing company,
Rolex designs, develops and produces in-house the essential components of its watches, from the casting of the
gold alloys to the machining, crafting, assembly and finishing of the movement, case, dial and bracelet. Furthermore,
Rolex is actively involved in supporting the arts and culture, sport and exploration, as well as the preservation of the
planet.

About Nike
The exclusive footwear, apparel, headwear, and glove supplier of the Arnold Palmer Cup, Our mission is what drives
us to do everything possible to expand human potential. We do that by creating groundbreaking sport innovations, by
making our products more sustainably, by building a creative and diverse global team and by making a positive impact
in communities where we live and work.